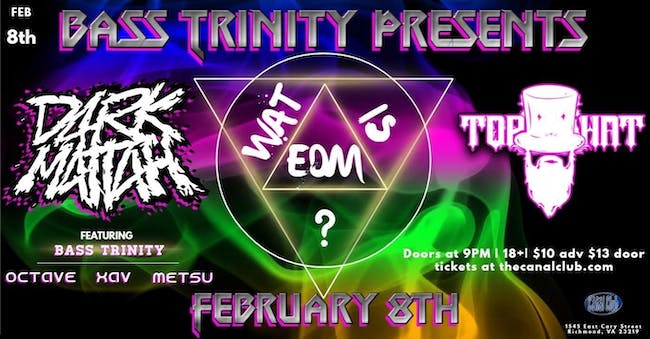 2019 has the producer making waves in the electronic scene across the east coast playing to crowds in Richmond, Baltimore, New York, Washington DC, Philadelhia, Virgnia Beach and New Haven as Tophat and with the collective he co-founded F CHAT.

His latest release with PROPR "Hypothermia" has been received well by fans and other producers. Expect an arsenal of unreleased originals and collabs to be unleashed from the bearded wonder.

Dark Mattah: facebook.com/darkmattah, souncloud.com/dark_mattah"From the deepest depths of space, we've found that Dark Matter is the most intense and heaviest matter known to man. Dark Mattah is here to bring the same heaviness and intensity to the music scene with his electronic production and mixing! Remixing tracks from Excision to Odesza and creating works of his own, there is little this artist can't do!"

Octave: DJ Octave started his musical quest when he entered the rave scene in 2014. A former listener of many popular punk rock/emo bands soon turned to the edm world after listening to top hit future bass artist Illenium, after feeling the powerful emotive sensation that edm brought young Octave he then set out on his own journey to move others the way he was moved. "I cant ever really explain the many emotions that rushed through me during Illeniums show, all I know is that the music was the only drug I needed to feel happy again. If I can make just one other person leave their head and surf through an emotive journey during one of my DJ sets, then my heart is full and happy" said the young DJ during an interview with @waywardmuser. Now residing in Richmond Virginia the 24 year old DJ had paired with 2 other DJ's to create the hottest new music group to RVA "Bass Trinity"

Metsu: DJ Metsu started his edm adventure back in 2014 after hearing about edm in early high school, he started listening to excision ,Datsik, and deletah the most and after his first show he started getting deeper into it. After seeing the intense and heavier side of dubstep and a lot of support from his friends he started Dj'ing just last year of November and has made some destructive mixes with his variety of double drops and chops he continues to improve on his craft. He choose the name “Metsu” for its meaning “Destruction” now along side DJ Octave and DJ Xav has started the newest group to come out Bass Trinity

XAV: Xav has had an atypical path to EDM music. Introduced initially to the genre in the late 2000’s in the form of deadmau5 and excision, he has always had a diverse taste for music. His style cannot be put into one category as he shares a love for all types of EDM from dance to bass. “If I had to pick a favorite style it would most likely be hard techno. To me nothing beats the dirty, heart pounding bass that comes with it when dancing.” Now residing in Richmond, Virginia the 27 year old DJ has paired with 2 other DJ’s to create the dynamic hottest new music group “Bass Trinity”