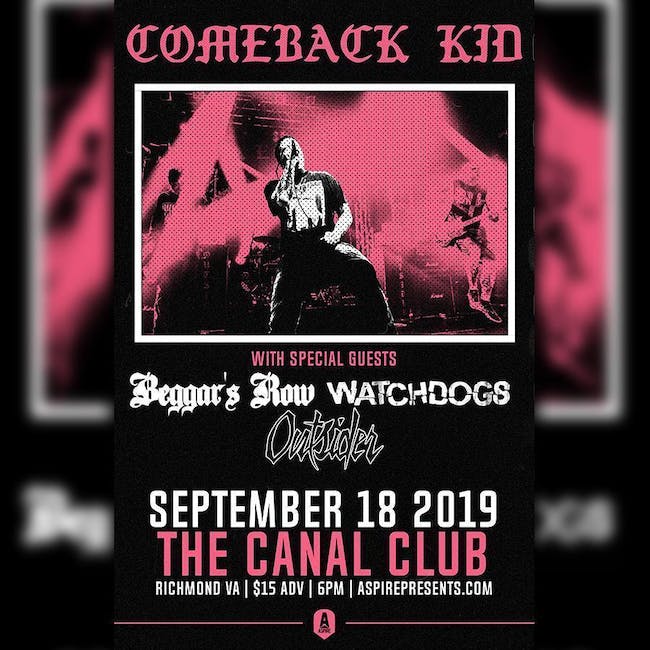 "Since dropping their debut full-length, 2003’s Turn It Around, COMEBACK KID has been an undeniable staple of the hardcore community. Each subsequent release has built upon the foundation of its predecessor while continually experimenting with and incorporating new musical elements from beyond the confines of modern hardcore. Five seconds into the band’s latest release, Symptoms + Cures, though, it’s made clear that this time around, COMEBACK KID has pushed their output to a new plateau.

Originally formed in 2000 by members of Winnipeg, Canada’s underground music scene, COMEBACK KID has amassed a catalog of four full-length international releases along with a live CD/DVD. Says vocalist Andrew Neufeld about the band’s origins: “We wanted to keep the intensity from our other bands or those we looked up to at the time, but also took influence from ‘90s skate punk and more melodic acts.” He continues: “We wanted the music to be heavy, but the vocals were meant to incorporate a bit more melody than was found in traditional hardcore. Still, I don’t think we knew how far we could go with it at the time.” [Click artist name for more info.]

Abuse of Power is a hardcore band from Atlanta, Georgia.

Beggar's Row is a hardcore band from Virginia Beach, Virginia.

Watchdogs is a hardcore band from Richmond, Virginia and are currently signed to Life & Death Brigade.

Outsider is a hardcore band from Richmond, Virginia.