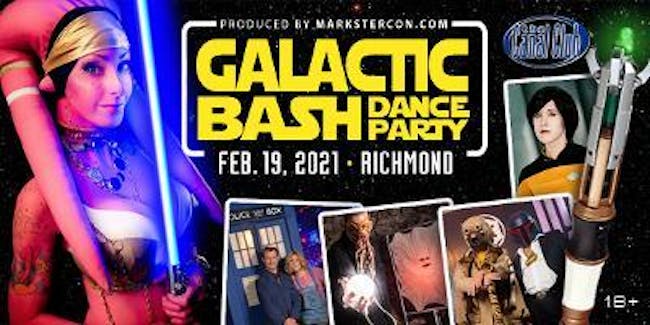 ENGAGE! The party beacon has been sent out into the Universe, inviting aliens across our Galaxy (and others) to assemble for a truly epic event coming to Richmond. Whether you are a fan of Star Wars, Star Trek, Doctor Who, Rick & Morty, Stargate, Firefly, The Orville, Futurama — and so many other sci-fi fandoms — you'll want to clear your social calendars for the evening of Feb 19th and join us at The Canal Club for the most GEEK N-tactular event this side of Dagobah!

Costumes/cosplay is HIGHLY encouraged (but not required) as we'll be hosting a GALACTIC COSTUME CONTEST during the event. We'll also have multiple photo ops set-up around the venue for you to enjoy while partaking of an exclusive selection of galactic-themed drink specials, made just for our event. (And yes, lightsabers and sonic screwdrivers are allowed!)

Of course no GALACTIC BASH: Dance Party would be complete without a floor filled with gyrating aliens from as far away as Gallifrey and the planet Vulcan. Wear your most comfortable dance shoes as we come together as ONE — galactic fandoms aside — and celebrate our love of outer space at an event that's sure to be talked about for many moons (maybe even three moons like Tattooine!)LIVE LONG AND PROSPER (and dance your alien butt off while you still can before the Borg assimiiate us all!)

This event is produced by Markster Con (www.MarksterCon.com), a production company known for it's adult-aged die-hard geek and alternative themed events around the SouthEast, including the WIZARD PUB CRAWL coming to Richmond soon