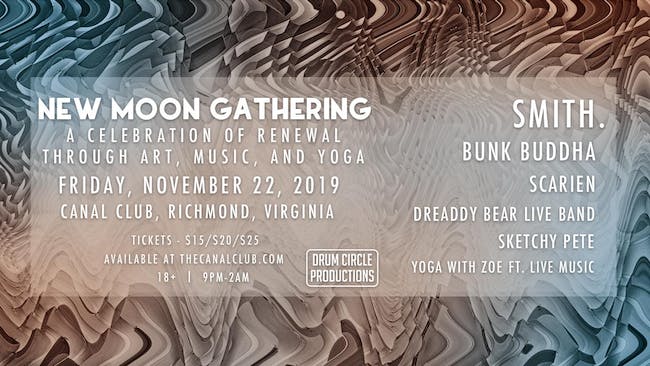 Celebrate Life through Music, Art, and more at our monthly New Moon Gathering!

Enjoy an intentionally curated creative experience designed to energize and uplift under the invisible moon inside of a warehouse-turned legend of a venue.

Event will begin with Yoga accompanied by Live music from 9-10, All skill levels and late arrivals welcome!

The Dance floor will be bordered by our Synesthesia Gallery of Visionary Art (curated by Dylan Cain and Kyle Rudd), and the Drum Circle Home Lounge

Flow performers and live artists will pepper your experience.

Deep experimental bass, dub, and hip hop are the clear influences to Smith.’s up and coming sound. One of our most crowd requested acts, his G’d out beats almost make too much sense for Richmond.

Bunk Buddha is an eclectic three-piece electronic band based out of Baltimore. Founded in 2013 by producer/DJ Scott Donovan, he would soon be joined by drummer Corey King, who brought a wealth of producing/DJ experience of his own to the table. For the past 6 years, they have honed their craft and sound, playing festivals, concert halls, and intimate clubs across the entire East Coast, bringing occasional guest musicians with them on stage/tour. In 2016 they released their first full length 11-track album, “Messages From Inner Space”, an acid and glitch infused journey through time. In 2017, Bunk Buddha’s live act was expanded again with the addition of multi-effects violinist Jon Hao, adding a symphony of live improvisation to every performance. They have kept busy, releasing music steadily in 2018, with another full length album “This Is Your Dose” self-released in 2019.

Consistently focused on “Fwd thinking music”, Scarien’s sound is enigmatic, stoned, and colorful. The first time we saw Scarien spin in Colorado was in hilltop mansion with shag carpet on the walls in between speakers he built with a cloud of smoke above his head. We’re stoked to bring him back to Richmond to share his unique vibe in his favorite RVA venue.

Inspired by everything from Tipper to Pretty Lights, Biggie to The Grateful Dead, Parker Tonra creates a colorful and eclectic form of Dance music based in Beats to move you, Bass to hold you down, and Melody that sticks around.

This performance will be the premier rendition of his Live Band act, which will include a ton of instrumental surprises even we haven’t been told about yet!

DC native, Northern Virginia resident, Peter Nguyen brings bass a new flavor with original tracks and compiled mixes that combine hip hop, funk, and everything in between. He’s been inspired by music from age, being introduced to the school choir/band in the fifth grade. His music career started like many others in a best friend’s basement where he developed a love for electronic music, gaining his name from skateboarding where he rarely landed clean tricks, "sketchy”. He is inspired by old school hip hop, new school Bass, and anything else he is feeling, including The Jurassic 5, A Tribe Called Quest, Black Star, Lupe Fiasco, (Pre-Carter 3)Lil Wayne, Kanye West, J. DIlla, Nujabees, Dr. Dre, Pretty Lights, Bassnectar, Tipper, Rusko, Flamingosis, Gladkill, The Black Keys, Rage Against the Machine, and John Mayer. He is the illusive, imaginary and sometimes a little bit sketchy, Pete.